We're looking for your feedback! Please answer a few questions to help us improve our website.

1.   Can women at risk for sexually transmitted infections (STIs) use progestin-only injectables?

Yes. Women at risk for STIs can use progestin-only injectables. The few studies available have found that women using DMPA were more likely to acquire chlamydia than women not using hormonal contraception. The reason for this difference is not known. There are few studies available on the use of NET-EN and STIs. Like anyone else at risk for STIs, a user of progestin-only injectables who may be at risk for STIs should be advised to use condoms correctly and consistently with every sex act—this will reduce the risk of becoming infected with an STI.

2.   Can women at high risk for HIV use progestin-only injectables?

Yes. Except for using spermicides containing nonoxynol-9 (alone or with a diaphragm), women at high risk of HIV infection can use any contraceptive method, including progestin-only injectables (see Chapter 16 – Spermicides and Diaphragms). More detailed information on the topic is provided in Chapter 23 – Family Planning For Adolescents and Women at High Risk for HIV, including the importance of integrating HIV testing services into family planning care in settings where risk of HIV is high.

3.   If a woman does not have monthly bleeding while using progestin-only injectables, does this mean that she is pregnant?

Probably not, especially if she is breastfeeding. Eventually, most women using progestin-only injectables will not have monthly bleeding. If a woman has been getting her injections on time, she is probably not pregnant and can keep using injectables. If she is still worried after being reassured, she can be offered a pregnancy test, if available, or referred for one. If not having monthly bleeding bothers her, switching to a different method may help.

4.   Can a woman who is breastfeeding safely use progestin-only injectables?

Yes. This is a good choice for a breastfeeding mother who wants a hormonal method. Progestin-only injectables are safe for both the mother and the baby starting as early as 6 weeks after childbirth. They do not affect milk production.

5.   How much weight do women gain when they use progestin-only injectables?

Women gain an average of 1–2 kg per year when using DMPA. Some of the weight increase may be the usual weight that people gain as they age. Some women, particularly overweight adolescents, have gained much more than 1–2 kg per year. At the same time, some users of progestin-only injectables lose weight or have no significant change in weight. Asian women in particular do not tend to gain weight when using DMPA.

No. Research on progestin-only injectables finds that they do not disrupt an existing pregnancy. They should not be used to try to cause an abortion; they will not cause abortion.

8.   How long does it take to become pregnant after stopping DMPA or NET-EN?

No. Many studies show that DMPA does not cause cancer. In fact, DMPA use helps protect against cancer of the lining of the uterus (endometrial cancer). Findings of a few studies on DMPA use and breast cancer are similar to findings on the use of combined oral contraceptives (pills): women using DMPA were slightly more likely to be diagnosed with breast cancer while using DMPA or within 10 years after they stopped. It is unclear whether these findings are explained by earlier detection of existing breast cancers among DMPA users (for example, due to more frequent contact with health workers) or by a biologic effect of DMPA on breast cancer.

A few studies on DMPA use and cervical cancer suggest that there may be a slightly increased risk of cervical cancer among women using DMPA for 5 years or more. Cervical cancer cannot develop because of DMPA alone, however. It is caused by persistent infection with human papillomavirus (see Cervical Cancer in Chapter 22). Little information is available about NET-EN. It is considered to be as safe as DMPA and other contraceptive methods containing only a progestin, such as progestin-only pills and implants.

10.   Can a woman switch from one progestin-only injectable to another?

11.  How does DMPA affect bone density?

During use, DMPA decreases bone mineral density slightly. This may increase the risk of developing osteoporosis and possibly also increase the risk of having bone fractures later, after menopause. WHO has concluded that this decrease in bone density does not place age or time limits on the use of DMPA.

14.  What if a woman returns for her next injection late? 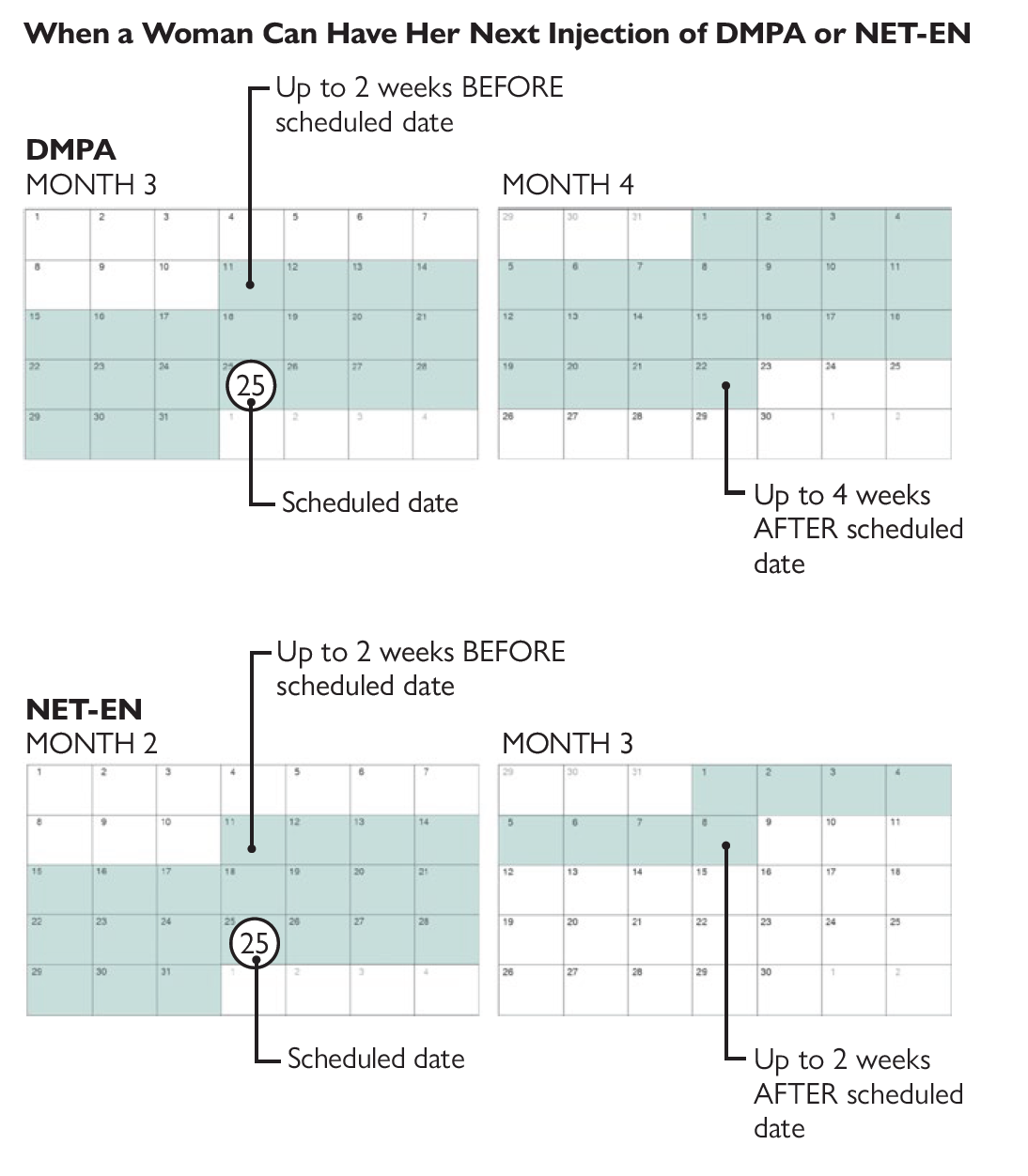 A woman can have her next DMPA injection even if she is up to 4 weeks late, without the need for further evidence that she is not pregnant. A woman can receive her next NET-EN injection if she is up to 2 weeks late. Some women return even later for their repeat injection; in such cases providers can use the instructions on Ruling Out Pregnancy, and if pregnancy can be ruled out then the injection can be given and the woman should use a backup method for the next 7 days.